Of overturning moments and restoring moments – the engineering of a Bristol statue
18th August, 2020

Tim Lucas, partner and structural engineer at Price & Myers, recounts the engineering solutions required for a stealth installation following the overturning of the Edward Colston statue


I had a phone call a few weeks ago about a secret art project in Bristol by British artist, Marc Quinn. ‘Is it something to do with Colston?’ I asked. It was. I’ve watched the videos of Edward Colston being toppled. With my engineer’s eye, I see how fragile many a statue is. Their apparent permanence belies their fragility.

The plinth where the statue of Colston once stood was temporarily home to an artwork by Quinn last week. Surge of Power (Jen Reid) 2020 is a statue of a young black protester from Bristol, her raised hand clenched in a fist. The statue was removed by Bristol City Council 24 hours after it’s stealth installation and is now being held for the artist to collect or donate. Quinn has since said it was not intended to be in place permanently. I’m really disappointed that it was only up for a day but it did what it needed to do. The brief was that they didn’t want to get prosecuted for criminal damage, that it could be installed in 15 minutes, and that it didn’t fall off and was safe.

The toppling of statues is not a new phenomenon. Whether it be monarchs, dictators, tyrants, revolutionaries or has recently been the case, slave-traders, the permanence of the statue is illusory. As the effigy of Edward Colston tipped into Bristol harbour, history echoed with the removal of monuments to Hussein, Lenin, Stalin, Rhodes and many more. It was a moment full of symbolism.

Statues are engineered to last. As the old slave-trader met his overdue demise, I put on my structural engineer’s hat to consider the way a statue comes into being, and how they sometimes meet their end.

Much of the engineering we undertake goes unnoticed until it breaks. But sometimes you’re given a view of the engineering the creator never meant you to see – until the moment comes along and there are enough people to pull on the ropes.

In art engineering the mission is not to design a structure. The engineer’s job is to understand the nature of the materials in the artwork – how strong or weak, brittle or flexible they are. Using that knowledge, we then conceive of ways to ensure they remain stable – resisting forces imposed upon them like wind or earthquake, and perhaps the occasional shove. 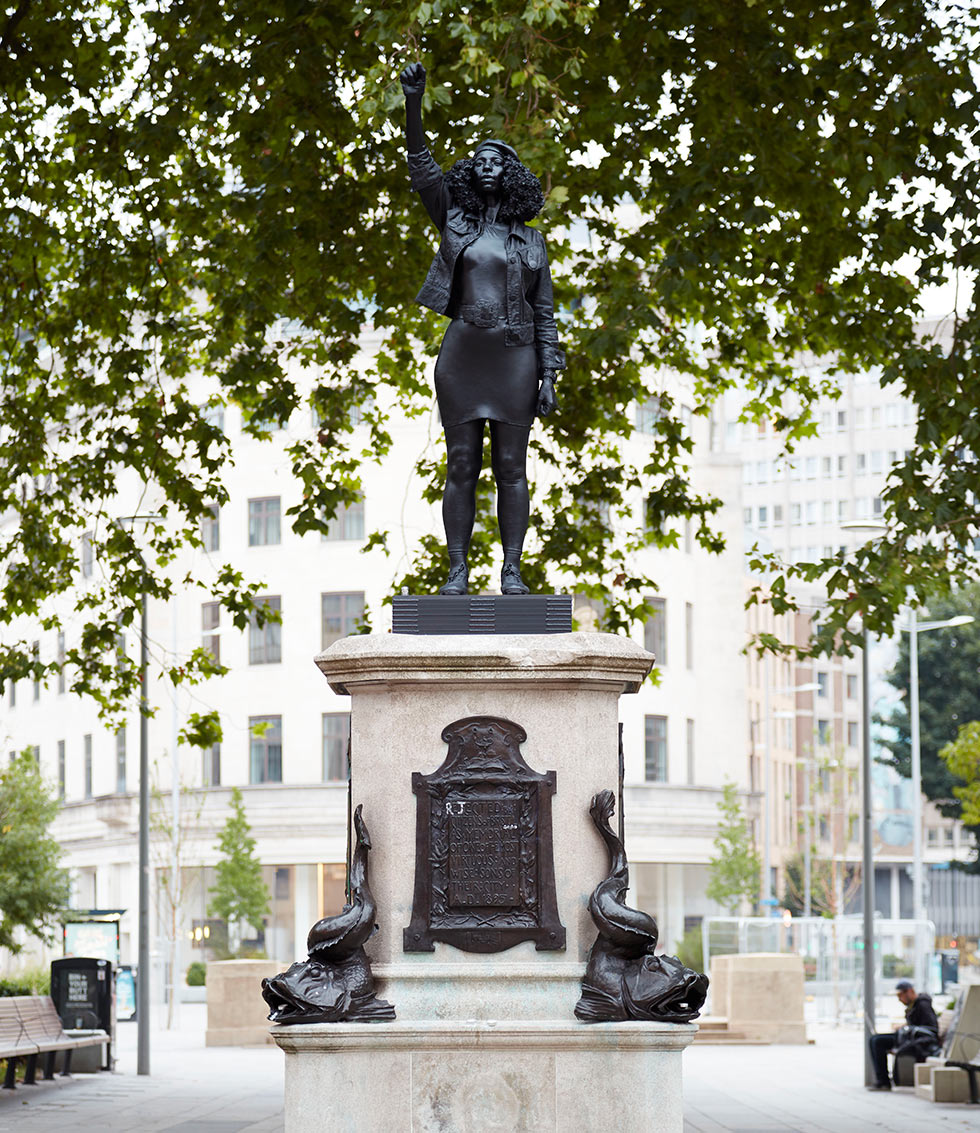 By and large, structural engineers don’t have massive egos, although I’m sure there are architects who may disagree. But we do enjoy a quiet satisfaction in our often-unseen hand, holding up the world. That hand is especially invisible in engineering art. The last thing any artist wants to incorporate into their composition is a sturdy post to hold it all together. An armature is only really welcome during the production process – what engineers in the building world would call ‘temporary works’. The engineering work is focussed on making artwork structural rather than designing a structure to hold it up.

I’ve been fortunate in my career to have worked on a number of art projects, including statues of suffragettes Emmeline Pankhurst and Millicent Fawcett, and pioneering black footballer, Laurie Cunningham. Designing statues is a unique brand of structural engineering, and a fascinating process to undertake from the artist’s conception to finally seeing them erected on site.

The statue of Millicent Fawcett – suffragist and first female statue in Parliament Square – holds a banner reading ‘Courage calls to courage everywhere’. Her body is cast as a bronze shell. Her outstretched arms holding the banner are, to the engineer’s eye, arm-shaped beams. Her fingertips are carefully integrated with stainless steel pins to ensure the connection to the bronze banner. She wears a flowing dress that drapes on the floor around her boots, which makes for a firm and strong base fixed down to her reinforced concrete plinth with stainless steel bars.

Over by Brisbane Road in east London the statue of Laurie Cunningham, the Leyton Orient, West Bromwich and Real Madrid footballer, is more precariously positioned. Balanced on the tip of his boot and ready to strike, the boot conceals stainless steel plates that support the weight of his bronze body, and anyone who might hang off his outstretched arms after an Orient win.

I re-watched the videos of Colston’s toppling. This time with a keener eye on the physics. He had ropes around his neck. They were being pulled with what looked like some relatively gentle tugs of human powered force. Enough force applied against a pivot creates a moment – in engineering speak this is called an ‘overturning moment’.

In Colston’s case the pivot point was the base of the ornately carved stone that his statue was fitted onto. This stone cleanly pivoted up, powered by the overturning moment, and slid off the rest of the plinth before crashing down onto the ground.

Quinn’s new statue is robust enough not to blow off or be easily pulled off by others climbing the plinth. It’s worth noting that the new statue was not authorised. We didn’t know how long it would last on the plinth and we certainly didn’t want to give Britol City Council an excuse on the grounds of safety as a reason for taking it down.`

To install the statue, we couldn’t drill down into the stone. My friend Dave Williams, from art logistics company Mtec, master-minded the installation and he didn’t want to get prosecuted for criminal damage. So I needed to work on another engineering metric – the ‘restoring moment’. If the restoring moment is greater than the overturning moment, then the statue stands and is stable. A very heavy base is the only reliable way to provide the restoring moment. The base weighs almost 600kg. This combined with the weight of the artwork is more than enough.

Next, steel tubes that fit inside the statue’s ankles and go up into her legs. The statue’s ankles have room for a 60mm steel tube, and two 48mm tubes welded to the heavy base. Finally, rubber pads are glued to the bottom of the base to give it grip and even out any rough spots on the stone plinth.

The statue of Jen Reid didn’t last long but she was safe and stable while up on the plinth. From an overturning moment to a restoring moment – given the current times – seems appropriate. 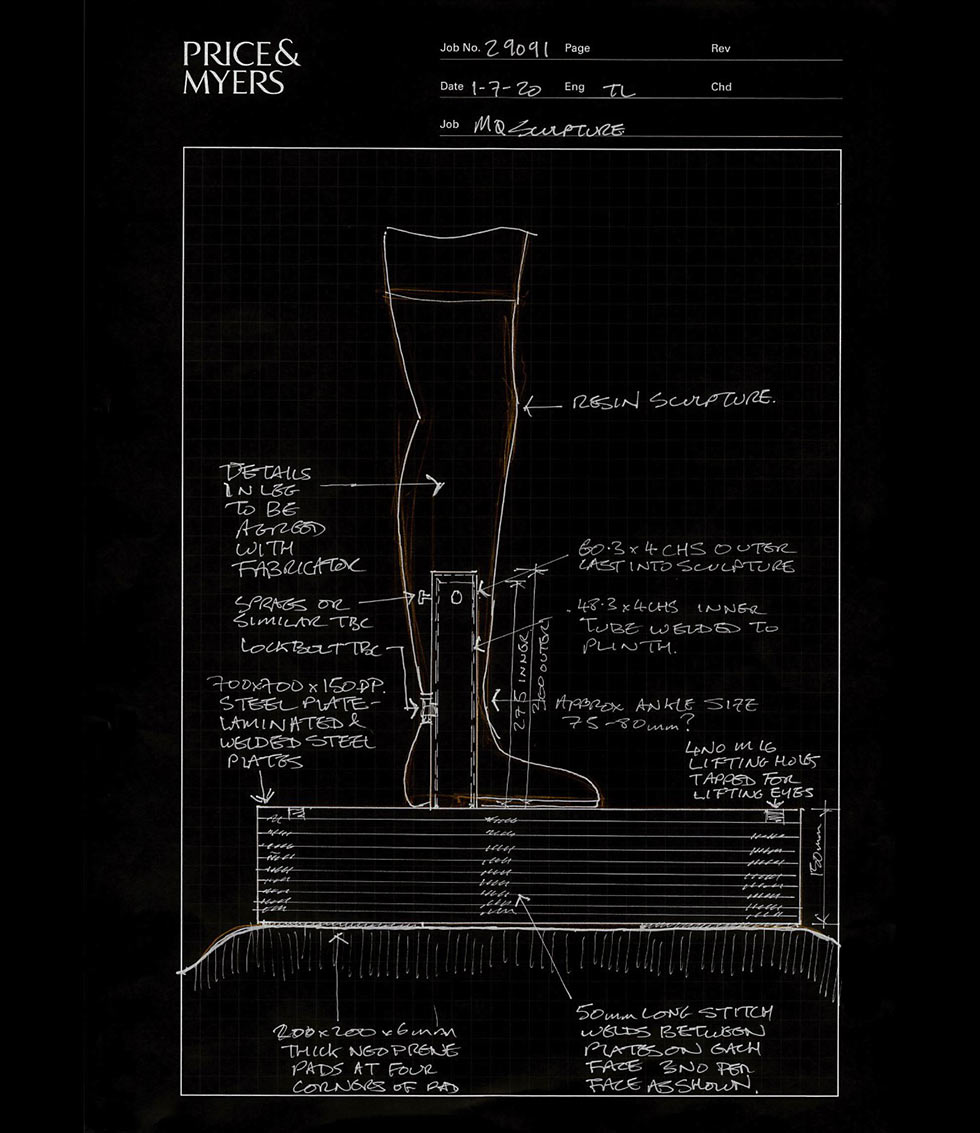 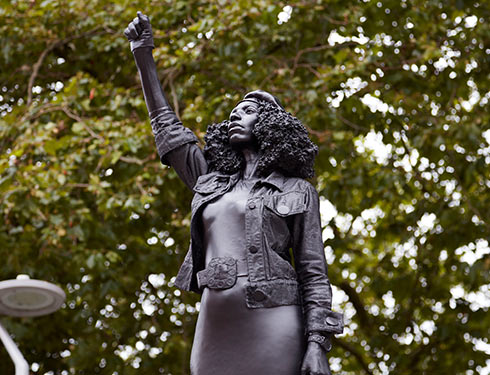 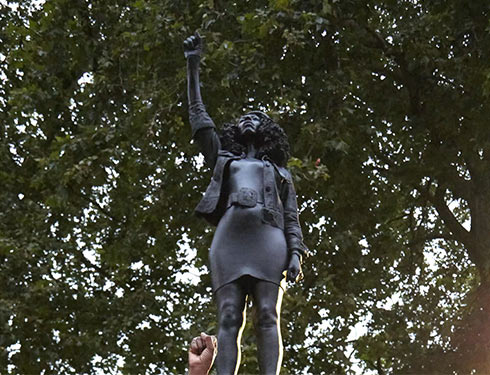