Any new construction produces carbon in two significant ways. Operational carbon – that produced by operating the building via heating and cooling, lighting, technology and the like - and embodied carbon – that produced in the creation of the building’s fabric. Price & Myers has worked with the University of Cambridge to produce a software tool called PANDA that can reduce embodied carbon by up to 40%.

PANDA stands for Parametric and Numeric Design Assessment. In this article, engineer Ben Gholam describes the history and background to the software, as well as outlining its functionality and potential uses.

The issue of embodied carbon in building structures has been widely covered in various journals and research papers in recent years - the key takeaway being that to reduce embodied carbon we simply need to use less material. However, one of the largest obstacles to reducing materials within the UK construction industry is the trade-off between expensive labour and design costs, and cheap materials – there is little incentive to reduce material use as doing so often results in higher overall costs.

In 2016 we embarked on a project with the University of Cambridge, the Steel Construction Institute and William Hare Group, funded by the government via Innovate UK. The aim of the project was to study the efficiency of steel framed buildings in relation to both their cost and embodied carbon. The initial phase of work involved studying as-built designs for 30 projects, gathering data for over 3500 individual steel beams and assessing their efficiency.

The clearest way to define the efficiency of a beam is by using the governing Utilisation Ratio (UR), which is essentially a measure of how hard the beam is working, or the proportion of the maximum possible allowable load. We assessed each beam in terms of the utilisation for bending, shear, deflection, and vibration.

Our results showed a clear trend – that engineers were not designing members beyond a utilisation of around 80-85%, and the vast majority of members were significantly under-utilised. Of approximately 3500 beams assessed as part of the study, around 40% of the total steel mass was effectively unnecessary.

Our team then assessed the embodied carbon within each of the floorplates studied and compared this to utilisation ratios of the beams contained within them. This data related to individual beams, but logic would dictate that there would be a direct relationship between the overall utilisation of a floorplate and the embodied carbon. In reality however we found this not to be the case. 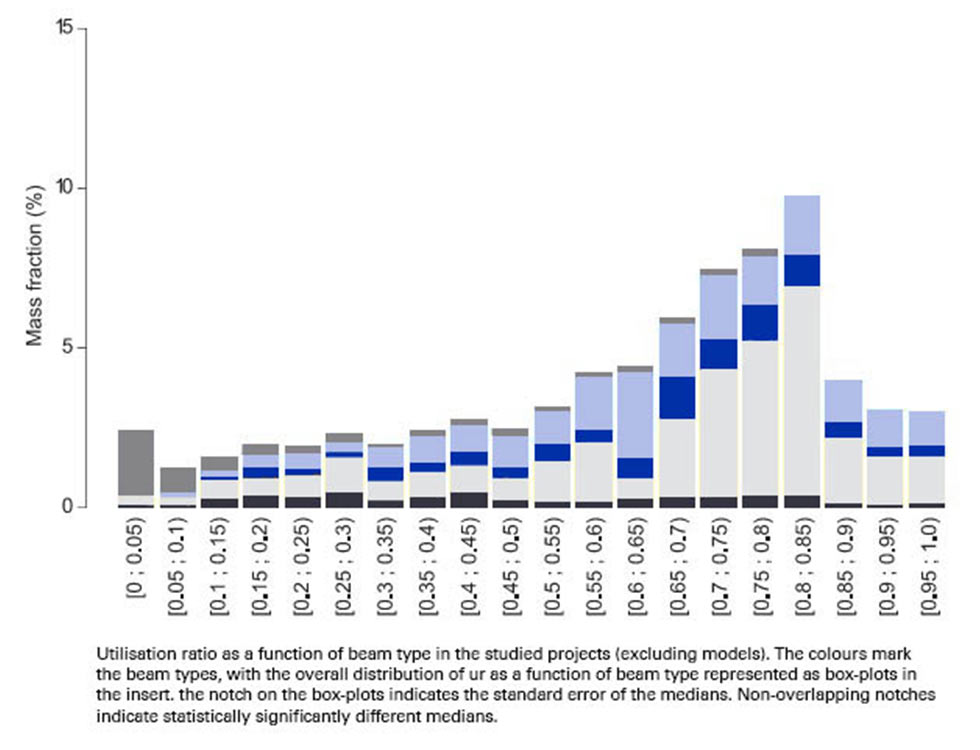 To demonstrate why this is not necessarily the case, consider two options for a simple three storey, ≈4000m2 commercial building. Option A has a typical span of 15m, with all beams designed at maximum UR (say 99.9%). Option B has the more typical value of 80-85% (Figure 3) but has extra rows of columns decreasing the grids to 7.5m in each direction. 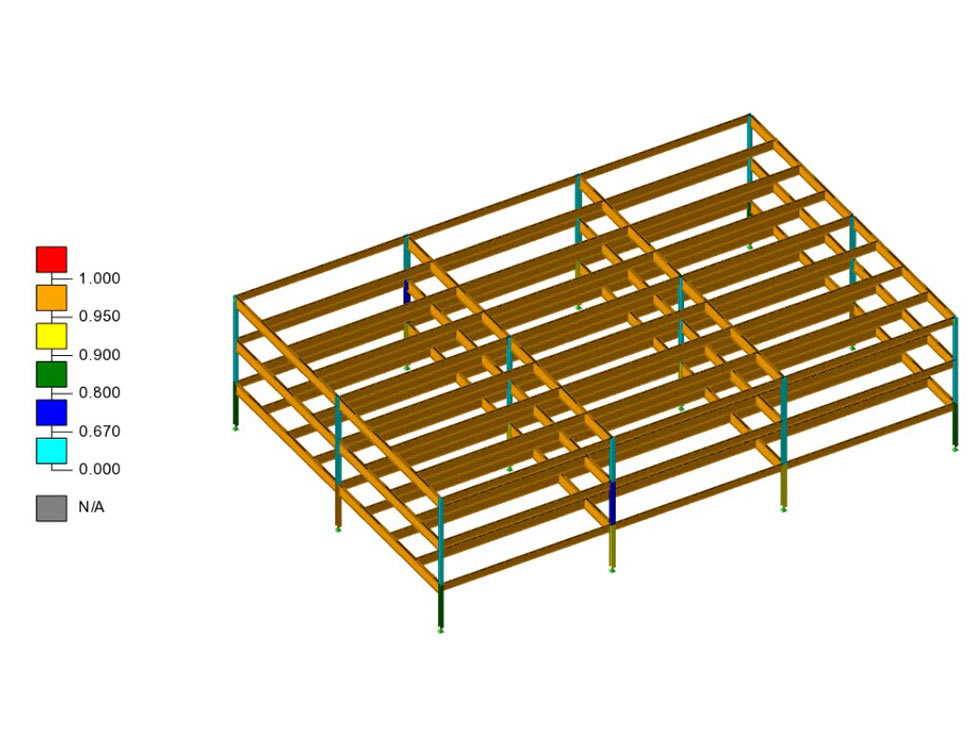 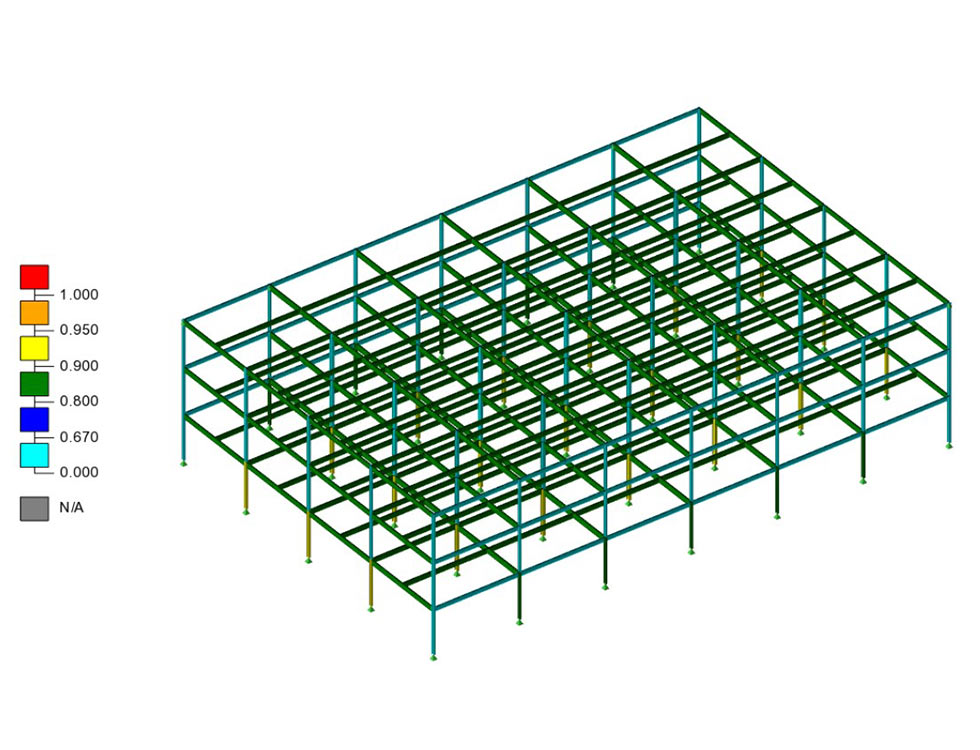 A crude embodied carbon estimate for the steelwork gives 100kgCO2e/m2 for Option A, but only 40kgCO2e/m2 for Option B. In this example, the building that has had the member sizes optimised still has an embodied carbon 2.5x higher than the one that hasn’t. (If we decided to optimise Option B and reduce steel by 15% as above, this value increases to almost 3x). The grid has a much more significant impact on the material use and the carbon figure than the member size optimisation in this example.

The ability to influence this outcome decreases as a project progresses. Although optimising the members in Option B could be done right up until the fabrication process with little impact on the overall design (a ‘local’ factor), changing the grid would have a wide-ranging impact and would need to be done as early as possible in the design (a ‘global’ factor).

We started listing all decisions that could influence efficiency of both individual beams and overall floorplates, at all project stages, and separated them into these two distinct categories. 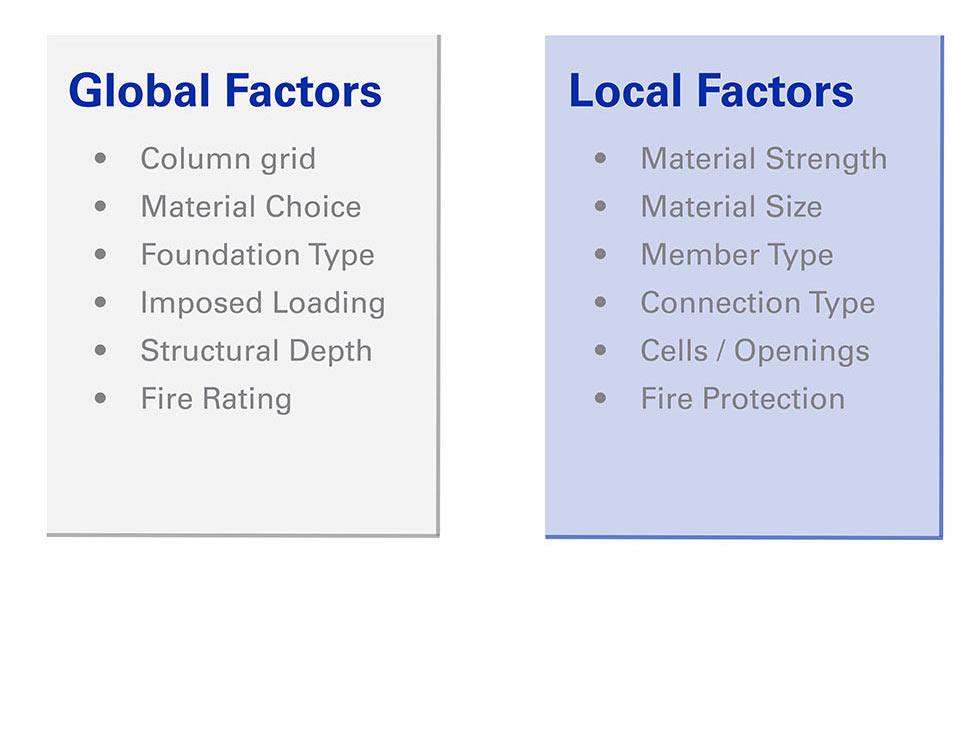 A different set of drivers influences the outcome of each of these, and as structural engineers we find many of these are often outside of our control once the design has passed a certain point - with cost, programme and procurement taking precedence and usually dictating the global factors.

Coupled with the pressures of design fee and programme, the outcome is often a design that fulfils the brief but sacrifices structural efficiency – with the engineer limited to only being able to adjust the local factors towards the end of the design process. This is a reactive process which - as we’ve shown - has the potential to make some reasonable savings but may not allow the engineer to unlock the potential optimum design. 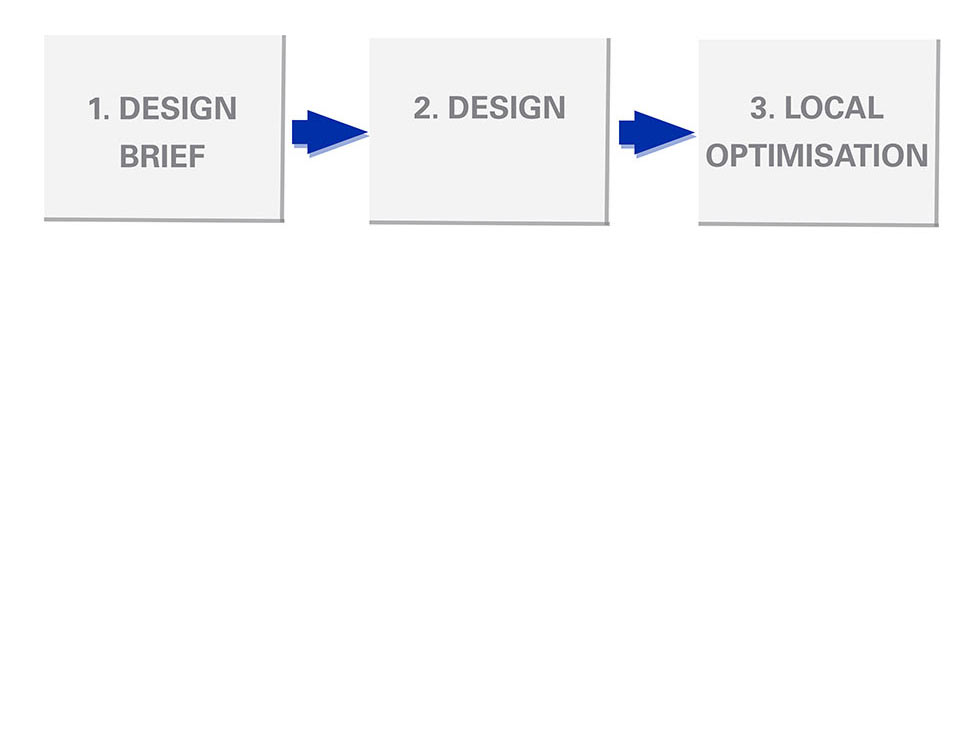 •   A reduction of the dead loads that means lower foundation and column loads, but increased problems with vibration performance or uplift from wind.
•   An increase in structural zones and subsequent building height leading to lighter floor beams, but increased wind loads on the stability systems and cladding quantities.
•   A decrease in column grid lowering materials in the floors but increasing materials (or costs) in the increased numbers of columns and foundations required.

Therefore, a holistic approach that considers the relative impacts and interactions of all possible decisions relating to the global factors listed above needs to be taken. If done at a sufficiently early stage this can influence the design brief, allowing the maximum potential for savings in materials/embodied carbon throughout the design process. There is likely to be a single or limited range of options that provide the optimal balance between a project’s cost and embodied carbon, and we needed a means for determining these. 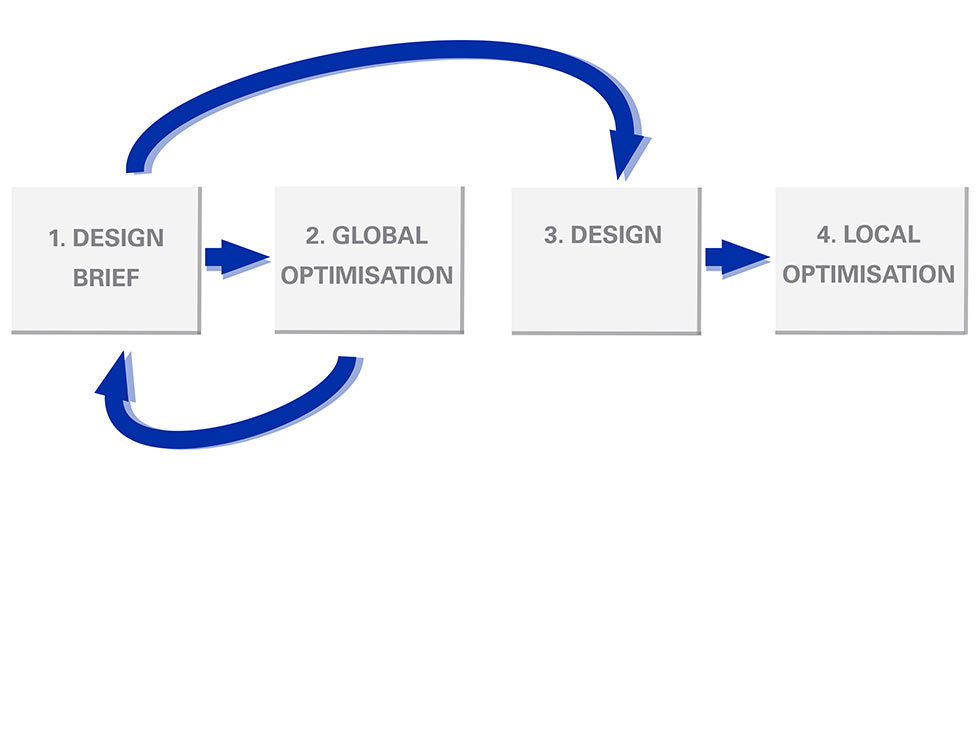 PANDA uses a simplified, orthogonal version of a building’s geometry and a whole series of inputs relating to the engineering design data for the specific project. It rapidly assesses a huge number of valid superstructure and substructure solutions and optimises the design for each of them, producing a full material listing for each. 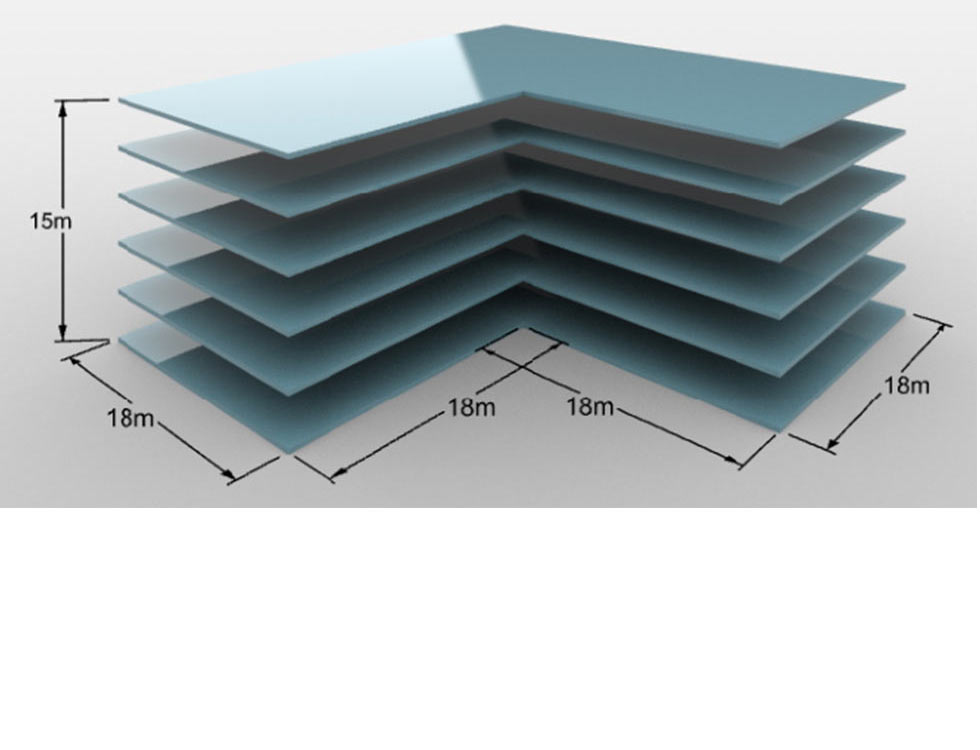 Once this listing is complete, it is then run through a detailed cost-carbon dataset. The carbon data is based on the current ICE database, with some modifications from the University of Cambridge team. The cost model has been developed in conjunction with construction consultant Gardiner & Theobald, who have provided data to match current markets rates for all materials and processes. The end result is a graph that outputs the possible options for the given building, clearly showing the variation in cost and carbon between different global design factors – grids, materials types and foundation options. The results can be filtered as necessary to remove unsuitable options. 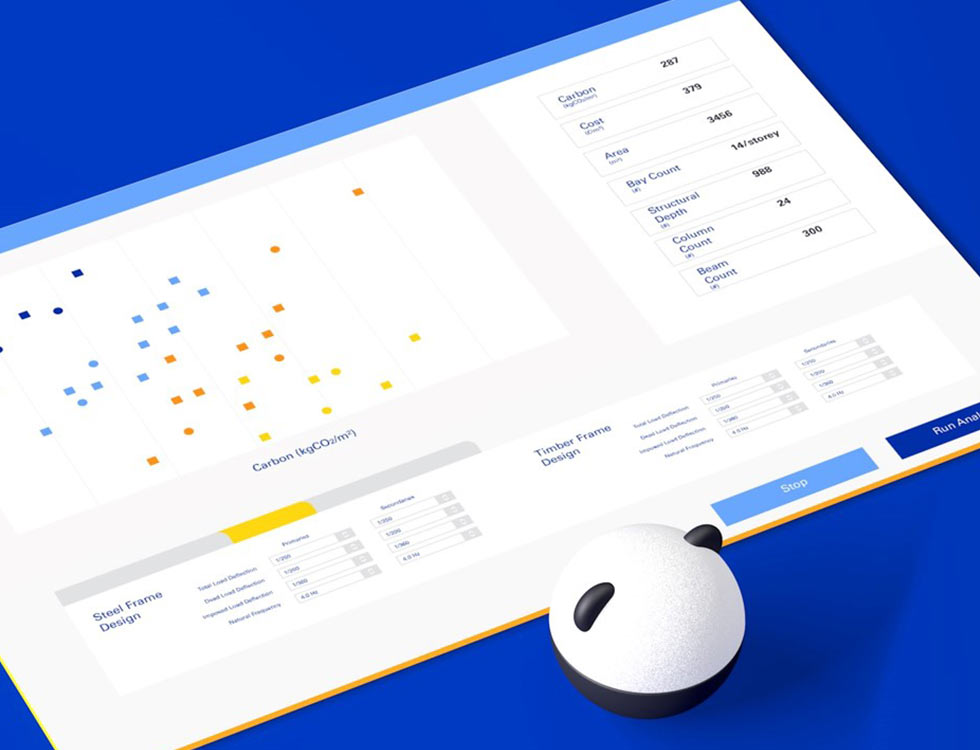 PANDA has been designed to be fast and powerful but also flexible. The team have the ability to customise and adapt the input data as required, and all output is fully transparent and exportable. We can currently assess reinforced concrete, steel and timber frames with a variety of proprietary flooring systems – with the ability to add in virtually any type of one-way spanning flooring system provided we have the required data.

One of the most powerful features of PANDA is the geotechnical design capability. Whilst some other tools focus solely on superstructure, as buildings get lighter and more carbon efficient the proportion of materials in the ground increases. As foundations are one of the key global factors, these are considered in PANDA either through a direct capacity input (from a Geotechnical report) or simply by entering in data on the anticipated soil build up.

The speed at which PANDA works means that the impact of individual decisions can be rapidly assessed. This enables us to quickly quantify the cost and carbon impact of changing the key global design factors, such as grid spacing or structural depth – we can do this in real-time during design workshops.

The aim of PANDA is to provide a set of ‘best-case’ results for the specific project. This gives the design team a set of values to work from and provides a benchmark for comparison as the project progresses. If used early enough in the project, the results from PANDA will ensure that the team start the design process having made the best possible initial decisions.

This inevitably will mean that many of the savings in embodied carbon will be ‘locked’ into the design from the outset. The data produced by PANDA will enable us to help quantify the impact of these early stage decisions – which will be critical in being able to challenge the status-quo of current design.

Impact and next steps

Achieving true net-zero will require a huge step change in construction methods and materials, featuring both developed and new technologies. However for the foreseeable future, high carbon materials such as steel and concrete will remain an essential part of the mix. We therefore need tools such as PANDA to ensure we design as carbon-efficiently as possible, whilst still meeting fee, programme and cost constraints.

We will also need to liaise with clients, contractors and the rest of the design team to challenge decisions that are often “done the way we always do them”, and persuade others to pursue lower carbon grids, loading and materials.

The greatest potential we have for influencing the final outcome is by ensuring the correct decisions are made in the critical early stages – we must therefore also ensure we are given the opportunity to feed into the design brief to enable this. Optimising for cost and optimising for carbon are not mutually exclusive, and with better ways of quantifying and assessing the impact of the decisions made in designing a structure we will be much better placed to advise the rest of the team and ensure our buildings can be as efficient as possible. 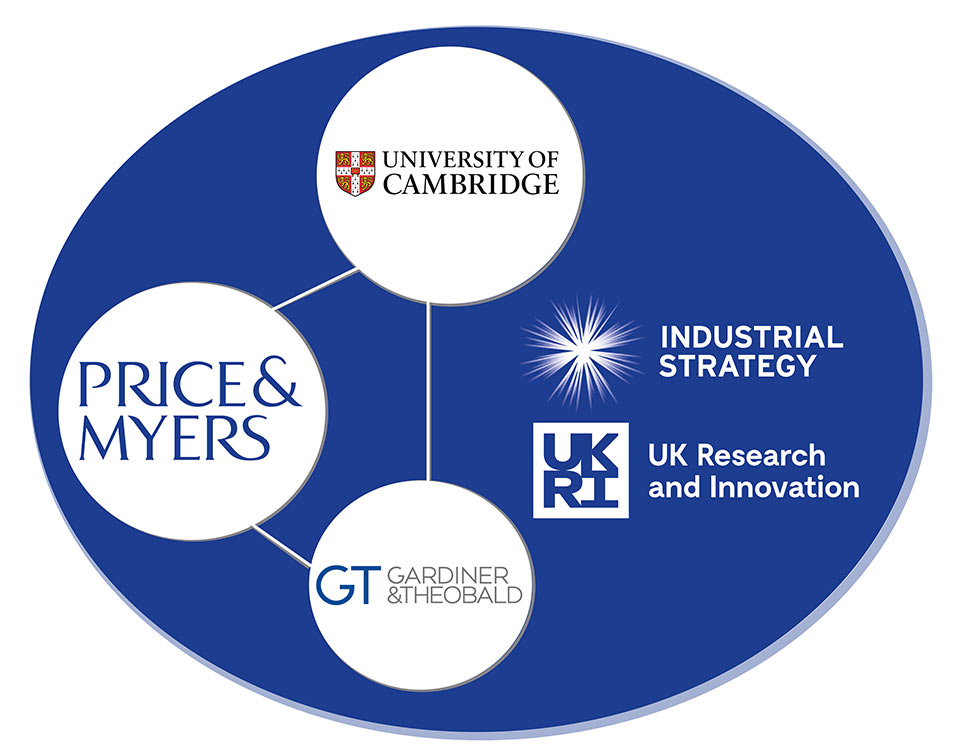 •   See Ben Gholam’s original version of this article, as published in The Structural Engineer magazine in October 2020 here
•   PANDA has been created in collaboration with the Cambridge team as part of UK FIRES
•   PANDA has been part-funded by Innovate UK. See our project story here
•   Our carbon data is mostly based on the excellent ICE database.
•   Cambridge published this paper on our research: Dunant, Cyrille F., Michal P. Drewniok, Stathis Eleftheriadis, Jonathan M. Cullen, and Julian M. Allwood. "Regularity and optimisation practice in steel structural frames in real design cases." Resources, Conservation and Recycling 134 (2018): 294-302.

Back to Climate Action 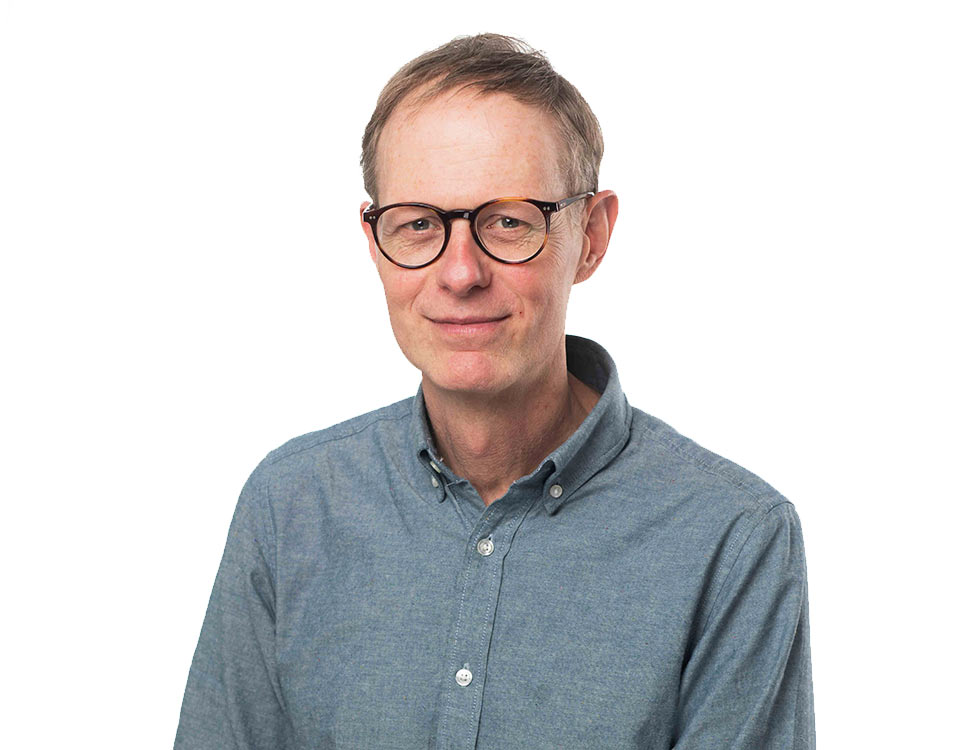 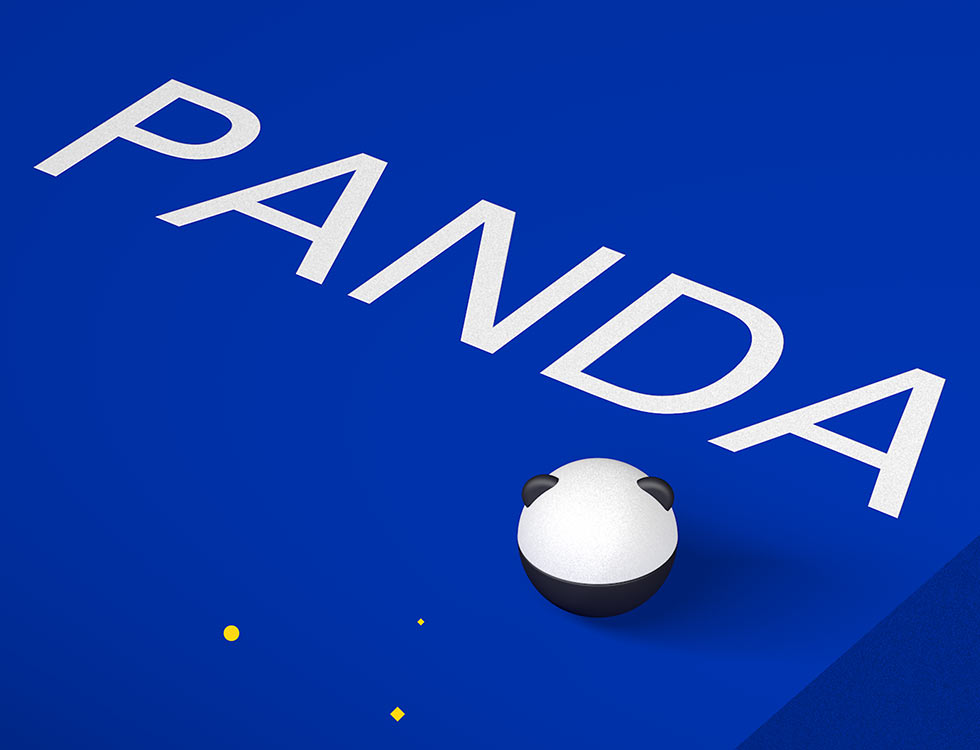 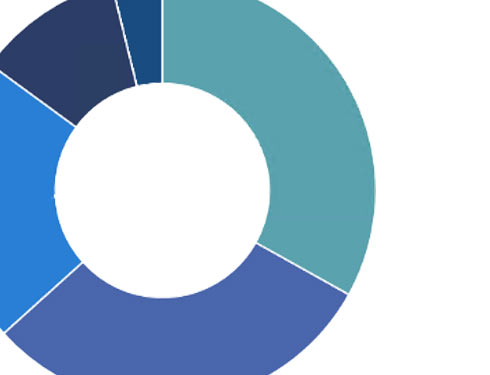 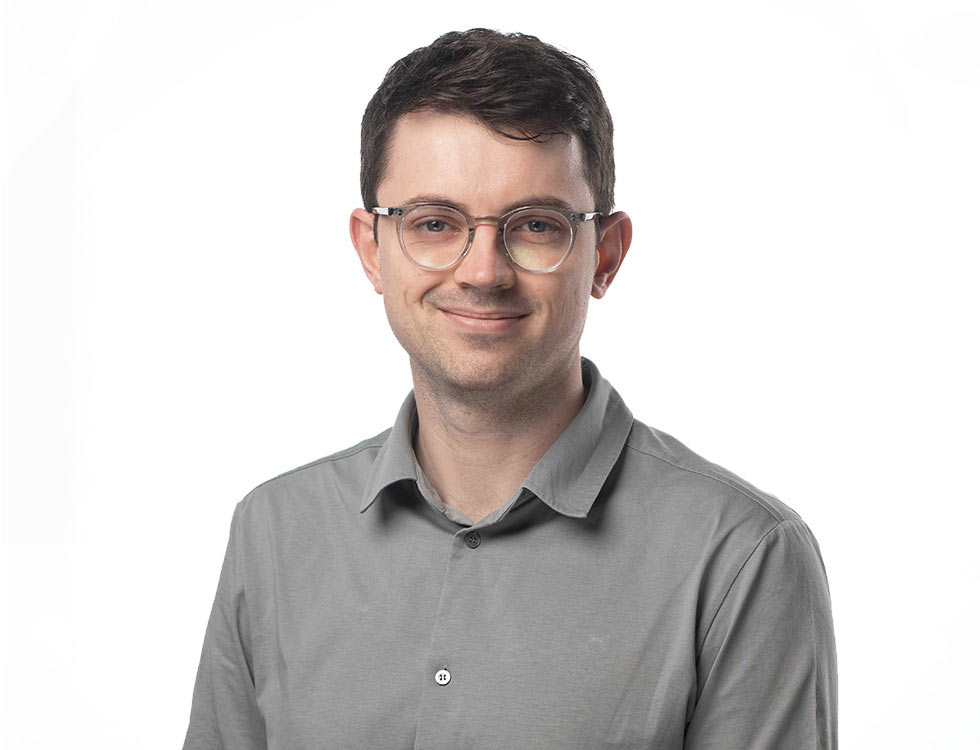